Our Co-Founder & COO, Sukhi Jutla, was recently listed as one the Top 10 most influential individuals in blockchain by TurgenSec along with:

You can find the list with more details here.

Our Co-Founder & COO, Sukhi Jutla, was recently invited to meet with Her Royal Highness Princess Beatrice at the royal residence St James Palace, where the Princess hosted the Good Growth Summit.

Designed to celebrate female entrepreneurs, the Good Growth Summit connects and inspires female leaders from across the US and UK technology ecosystem.

This exclusive invite-only event is designed to build connections and collaborations and to help female founders access the tools they need to start and scale their companies.

This year, the Summit was hosted by Her Royal Highness as she is a passionate advocate for helping to promote more women into technology and herself works for an artificial intelligence company in London.

The Princess expressed how she was personally inspired and encouraged by seeing so many female entrepreneurs driving the UK commerce forward. From her own business experiences, she expressed she didn’t underestimate the courage and conviction it takes to succeed and offered her support as we collectively work to create a more gender-balanced environment for innovation.

The event kicked up with a wonderful lunch reception followed by an afternoon of inspirational leaders sharing their top tips and personal journeys into the forays of tech.

Some of the guests had flown in from Silicon Valley and they shared their experiences in the hope of forging new relationships with our incredible UK talent pool.

The stories that we heard were all geared to inspire and fuel personal and business growth and it was wonderful to hear such inspiring stories.

Amongst the speakers were:

The event concluded with a sparkling champagne reception. We will share official photographs once they are released from the Palace!

Our Co-Founder & COO, Sukhi Jutla, was invited to speak about career progression as a panelist during the Inclusive Boards: Executive Leadership Programme.

This programme was aimed at senior women leaders who came from companies including Deliveroo, Draper Espirit, HSBC, MoneySuperMarket Group and Lloyds Banking Group.

It was run as a residential programme at the Mallory Court Spa at Leamington Spa with 2 days of facilitated learning.

Sukhi was joined by 2 other panelists including Tamara McMillen, Executive Director of Sales at Virgin Media Business and Namrata Sarmah, Senior Director at Viacom.

Sukhi shared her personal story of how she navigates her career progressions, from being an employee to becoming an entrepreneur and board member.

The event was a huge success and Ellen Partridge, Campaigns Officer for Inclusive Boards left this review for Sukhi:

‘’Sukhi was an inspiring panelist during the Inclusive Boards: Executive Leadership Programme, having a huge impact on senior women leaders in the room. She captured the attention of the room with her story and offered interesting perspectives on career progression, personal development, and work-life interface.’’

A few other reviews also include:

The Women In Tech Festival UK 2019 was held at The Brewery, London on the 17th of September where our COO and Co-Founder, Sukhi Jutla, was in attendance and also panel moderated the session ‘ Ready, Set, Start-up!’.

Sukhi commented: “This festival is important for us to attend as we believe, as a tech company, that the future of tech needs to include everyone and that includes women.”

She added: “Conferences like the Women in Tech Festival are so important to allow communities to come together and showcase female tech talent as well as providing an opportunity to network and learn about how to embark on a career in the tech field as a woman”.

Attended by thousands of people with 3 parallel stages and hundreds of hours of talks and workshops, this festival

centred around how to support women’s careers in the tech field as well as sharing stories and challenges in the start-up world.

Sessions throughout the day were varied and included practical tips on how to jump-start a career in tech, understand how to build teams and taking care of your mental wellbeing. Sessions covered topics such as:

Sukhi moderated a panel with four incredible female women who are all on different stages in their tech journeys:

It is the perfect example that you can re-ivent yourself and adapt to any career changes as long as you are willing to keep learning new skills.

If you missed it you can watch this short clip (on LinkedIn) where the panellists concluded by sharing their top tips for attendees to take away (with thanks to Kate Wood for the footage).

Each year Management Today recruits a stellar line-up of front-line leaders to help us shape an exciting conference. The advisory board helps us identify key speakers and ensures we achieve our mission of creating a conference that inspires and educates you.

Sukhi commented: “I’m very excited to be part of such an inspiring board to help shape the content and strategy for these important conferences which help many women navigate the business and entrepreneurial world. These conferences aim to equip attendees with the best knowledge and wisdom from the best speakers who been there and done it and are now sharing their know-how to help the next generation of women leaders to blossom and is an honour to be a part of their journey in this way”

The next conference, “Inspiring Women in Business”, will take place in London on November 21.

You can register here.

AboutTimeMagazine.co.uk introducing: #SheStartedIt100, definitive list of the top 100 women to watch in the UK 2019.

About Time Magazine says: “We need to do more to promote women in tech; according to a study by PwC, only 15% of employees working in STEM roles in the UK are female, with only 5% of leadership positions in tech held by women.”

At MarketOrders.net we are extremely proud to announce that our Co-founder and COO Sukhi Jutla has been listed as nr1 amongst all other great UK female Tech and Media industry entrepreneurs.

Profession: Co-Founder and COO of MarketOrders, the jewellery-tech startup that uses blockchain to make gold and diamond jewellery more ethical and transparent.

Her Story: Sukhi Jutla is an award-winning entrepreneur and author of three books. She is the co-founder of MarketOrders, an online B2B platform for the gold and diamond jewellery industry. She is a leading international speaker, influencer and thought leader in tech and a qualified IBM Blockchain Foundation Developer. In April 2018 Sukhi made global headlines when she became the World’s First #1 Bestselling ‘Blockchain’ Author.

Click HERE to read the article on abouttimemagazine.co.uk and see other amazing ladies highlighted by #SheStartedIt100

MarketOrders is proud to announce their co-founder and COO, Sukhi Jutla is named as a Top 100 Woman in Tech by WeAreTechWomen.

MarketOrders CEO, Ram Krishnna Rao said, ‘I am immensely proud of having a co-founder who is a role model and leading influencer in the tech field. Sukhi brings immense courage and determination to highlighting and encouraging more women into tech as well as ensuring MarketOrders is on the cutting edge of delivering the best technical solutions for the gold jewellery trade industry.’’

Sukhi Jutla saiid, ‘It’s an honour to be recognised as a top influencer and thought leader in tech and I hope my accomplishments continue to inspire other women that a career in tech is feasible and possible no matter what stage you enter this field; it’s open to all.’’

The winners of these awards showcase remarkable women within the technology sector covering a wide range of roles such as Applied Machine Learning Scientist; Cyber Security Consultant; Radio Modelling Engineer; Futurist; a Research Associate in Turbomachinery; and Rapid Prototyper.

Since September 2018, WeAreTechWomen has been searching the UK for the best
female tech talent in the country.

The TechWomen100 awards are the first of their kind to focus solely on the female tech talent pipeline and to also recognise the impact of champions, companies and networks that are leading the way for the future generations of tech talent.

Winners’ will shortly receive an invitation to a prestigious awards ceremony on 31
January 2019.

MarketOrders is thrilled to announce their co-founder and COO, Sukhi Jutla, has been selected as a top 100 European Digital Pioneer and featured in a special report published by the Financial Times with support from Google on 21 November.

The special report entitled ‘’Europes Road to Growth’’ was officially launched at Google’s offices in Brussels in a special awards ceremony attended by Sukhi Jutla. 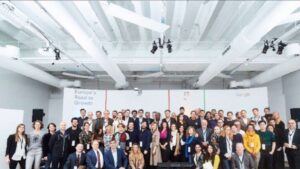 This project, Europe’s Road to Growth, aims to highlight individuals, organisations and companies, large and small, that are tackling the challenge of digitalisation in interesting ways.

The Financial Times whittled down 4000+ nominations to a list of 100 digital transformation champions.

Sukhi Jutla of MarketOrders was listed as a ‘Leading Individual’, a list of men and women who are helping to promote digital transformation in Europe as leaders and influencers, both behind the scenes and in the public eye. 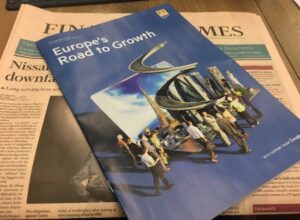 A message from the CEO, Ram Krishnna Rao:

‘’I am immensely proud of my team at MarketOrders who continue to challenge the status quo and keep pushing boundaries whilst showcasing the best of British startup talent. MarketOrders is pioneering new ways for the gold and diamond jewellery industry to embrace technology helping them to become digital leaders in their own businesses. A special thank you to Sukhi Jutla who continues to fearlessly push boundaries, is a formidable COO and co-founder and a rising star. She is a pivotal and inspiring role model for all women, not only in tech but for those everyone striving to make a real impact.’’

You can find out more about this project here: https://www.ft.com/reports/europe-road-to-growth

MarketOrders is thrilled to announce their co-founder and COO, Sukhi Jutla, has made the shortlist.

The public vote of support is now open for the 200 individual shortlist nominees. You can vote for Sukhi here: https://bit.ly/2SPeO5o

The TechWomen100 awards are the first of their kind to focus solely on the female tech talent pipeline and to also recognise the impact of champions, companies and networks that are leading the way for future generations of tech talent.

Over the nomination period, WeAreTechWomen received over 500 nominations from across the UK and Northern Ireland. The calibre of entries for these awards was exceptional and all of the judges stated how difficult it was to arrive at the shortlist due to the amazing achievements of our nominees.

Vanessa Vallely, Founder of WeAreTechWomen said, “At WeAreTechWomen we have made it our personal mission to shine a spotlight on women working in tech. Our strategic aim is to highlight 500 female future leaders in technology by 2022. The response to this year’s awards has been fantastic and calibre of entries has been outstanding! I am so proud to see so many women in tech recognised for their achievements and really look forward to seeing who our final winners will be in December.

We are excited to announce that our co-founder and COO, Sukhi Jutla,  has been shortlisted for the prestigious Variety Catherine Awards in the Entrepreneurial Spirit Award!

This award recognises women who have ‘done it their way’ by founding and running their own company and have worked to achieve significant results in their chosen field.

We are super proud of Sukhi who continues to lead the way as an inspirational role model to many female founders and entrepreneurs and we wish her the best of luck!

The judging panel will be made up of the following amazing women:

The winner will be announced on Nov 13th at an awards ceremony. You can get your tickets here: