MarketOrders Co-Founder, Sukhi Jutla, was recently named as one of the UK’s top 100 Women in Tech. She recieved her award on Thursday 31 January during the awards ceremony taking place at the London County Hall, London.

The award’s celebration was an opportunity to meet and network with other winners, sponsors and judges; enjoy a three-course meal, wine and champagne reception to toast achievements.

Only two days after receiving its certificate as a Top 100 European Digital Pioneer by The Financial Times and Google, Sukhi Jutla couldn’t be prouder: “I’m honoured to be named as a Top 100 Woman in Tech in the UK. The UK is one of the best places to launch your tech career and I hope this award continues to inspire more women into tech careers and show you can make a huge and lasting impact”.

Since September 2018, WeAreTechWomen has been searching the UK for the best female tech talent in the country. They received over 500 nominations from across the UK and Northern Ireland and 28,000 votes of support from across the globe. The calibre of entries for these awards was exceptional and all of the judges stated how difficult it was to arrive at the shortlist due to the amazing achievements of the nominees.

Vanessa Vallely OBE, Founder of WeAreTechWomen said, “At WeAreTechWomen we have made it our personal mission to shine a spotlight on women working in tech. Our strategic aim is to highlight 500 female future leaders in technology by 2022. The response to this year’s awards has been fantastic and calibre of entries has been outstanding! I am so proud to see so many women in tech recognised for their achievements and look forward to celebrating our winners and their achievements.”

Author of three books and World’s First #1 Bestselling ‘Blockchain’ Author, Sukhi and her team launched MarketOrders in 2016, with the ambition of evolving the gold and diamond jewellery industry using technology.

Two years later, MarketOrders is a running online B2B platform helping independent retail jewellers to get the products they need faster, cheaper and direct from global suppliers. Over a thousand products are available and the platform serves UK retailers and partnered with suppliers in four international locations: Hong Kong, Singapore, Dubai and India.

On Wednesday 30 January, Sukhi received a great news from Hounslow Chamber of Commerce and the Hounslow Business Awards team. She and MarketOrders have been shortlisted respectively for Entrepreneur of the Year and Best New Business.

MarketOrders is currently preparing its crowdfunding campaign which will be live in February. The funds will be invested in the expansion of the team, technology development and marketing.

To learn out more about MarketOrders: https://marketorders.net

MarketOrders is pleased to announce their co-founder and COO, Sukhi Jutla is named as a Female Tech Trailblazer by the latest list announced by Business Cloud.

The list is made up of everybody from household names to inspirational women at the start of a journey in tech who have the potential to change the industry. The list is published online at Business Cloud as well in the Q4 2018 print edition.

We’ve ripped up the rule book…rather than limit ourselves to 101 names on our must-read lists we’ve taken off the brakes by publishing the names of 301 female entrepreneurs and pioneers of tech. One statistic that is trotted out is that only 17 per cent of people in the tech sector are women. We need to increase the number of women working in tech and we hope that by publishing a list of 301 female entrepreneurs and pioneers of tech, they’ll become role models to the next generation.’’

‘I’m very proud to have a diverse team as we actively encourage and promote more women in tech at MarketOrders so it’s great that my co-founder and COO Sukhi is recognised as a tech pioneer and serves as a role model to other women considering a career in technology.’ 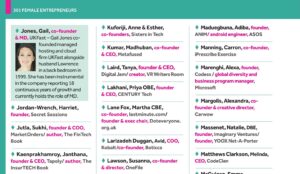 The full list can be viewed online here: https://www.businesscloud.co.uk/301-tech-trailblazers

MarketOrders helps independent retail jewellers to source the products they need faster, cheaper and direct from suppliers through our innovative tech platform and marketplace.

MarketOrders is proud to announce their co-founder and COO, Sukhi Jutla is named as a Top 100 Woman in Tech by WeAreTechWomen.

MarketOrders CEO, Ram Krishnna Rao said, ‘I am immensely proud of having a co-founder who is a role model and leading influencer in the tech field. Sukhi brings immense courage and determination to highlighting and encouraging more women into tech as well as ensuring MarketOrders is on the cutting edge of delivering the best technical solutions for the gold jewellery trade industry.’’

Sukhi Jutla saiid, ‘It’s an honour to be recognised as a top influencer and thought leader in tech and I hope my accomplishments continue to inspire other women that a career in tech is feasible and possible no matter what stage you enter this field; it’s open to all.’’

The winners of these awards showcase remarkable women within the technology sector covering a wide range of roles such as Applied Machine Learning Scientist; Cyber Security Consultant; Radio Modelling Engineer; Futurist; a Research Associate in Turbomachinery; and Rapid Prototyper.

Since September 2018, WeAreTechWomen has been searching the UK for the best
female tech talent in the country.

The TechWomen100 awards are the first of their kind to focus solely on the female tech talent pipeline and to also recognise the impact of champions, companies and networks that are leading the way for the future generations of tech talent.

Winners’ will shortly receive an invitation to a prestigious awards ceremony on 31
January 2019.

MarketOrders is thrilled to announce their co-founder and COO, Sukhi Jutla, has made the shortlist.

The public vote of support is now open for the 200 individual shortlist nominees. You can vote for Sukhi here: https://bit.ly/2SPeO5o

The TechWomen100 awards are the first of their kind to focus solely on the female tech talent pipeline and to also recognise the impact of champions, companies and networks that are leading the way for future generations of tech talent.

Over the nomination period, WeAreTechWomen received over 500 nominations from across the UK and Northern Ireland. The calibre of entries for these awards was exceptional and all of the judges stated how difficult it was to arrive at the shortlist due to the amazing achievements of our nominees.

Vanessa Vallely, Founder of WeAreTechWomen said, “At WeAreTechWomen we have made it our personal mission to shine a spotlight on women working in tech. Our strategic aim is to highlight 500 female future leaders in technology by 2022. The response to this year’s awards has been fantastic and calibre of entries has been outstanding! I am so proud to see so many women in tech recognised for their achievements and really look forward to seeing who our final winners will be in December.

MarketOrders is thrilled to announce they are part of the #WeAreOneTech campaign to inspire more women and individuals from underrepresented communities to consider starting an ambitious startup.

MarketOrders COO and co-founder, Sukhi Jutla, is one of 4 startup founder stories to be profiled for the launch of this nationwide campaign.

OneTech is a ground-breaking new initiative, supported by the JPMorgan Chase Foundation, to provide female entrepreneurs, and those from some of London’s most underrepresented communities, with the opportunity to start and scale a high growth tech business.

The lack of diversity costs the tech industry dearly in untapped potential, talent and growth. Capital Enterprise has long recognised that this needs to change.

This project will connect founders with mentors and access a range of workspace, pre-acceleration, acceleration and investment readiness opportunities.

We are aiming to get businesses to better understand why diversity and inclusion makes sense; what needs to be done to help diversify their recruitment and selection processes; and double the number of female and BAME (Black, Asian and Minority Ethnic) founders accessing investment by 2020.

We hope to inspire more women and individuals from underrepresented communities to consider starting an ambitious startup, and affect real change with supply, demand and culture change in London’s booming tech ecosystem.

On Oct 11 2018, MarketOrders attended a roundtable hosted by Business Cloud to discuss the impact of Brexit on the UK tech scene.

The event hosted in the capital heard from the heads of fast-growing technology businesses, who remain defiantly optimistic in the face of Brexit uncertainty but admit that recruitment will be a challenge.

Our COO, Sukhi Jutla, commented she was optimistic because entrepreneurs are pragmatic and have a ‘can-do’ attitude, they will adapt and survive. This sentiment was echoed by the other entrepreneurs in the room.

Read the article below which captures the key points raised and discussed:

London’s start-ups will find it more difficult to find and retain technology talent after Brexit – but tech leaders remain upbeat in the face of uncertainty.

That was the general view from BusinessCloud’s latest roundtable discussion in the capital, which was held at KPMG’s offices in Canary Wharf and heard from a panel of experts and tech companies.

Ben Corrigan is co-founder and chief revenue officer at shopping tool Pouch, which has a team of 11, with the majority being non-UK nationals.

The entrepreneur insists that he remains optimistic providing that access to talent isn’t limited following the UK’s exit from the European Union.

“If very talented tech people decide not to come to London because they fear that it’s too difficult then we’ll all be fighting over the same talent,” he said.

“We have to make sure we communicate as a city and a country that we are open and tolerant and that we want the best and the brightest and that has to be then followed through with a political solution.”

Felicia Meyerowitz, CEO of Akoni Hub, admits there will be “a big bump” but is confident that the UK’s economy is “strong”.

She says most of the clients she meets aren’t concerned and all have plans in place.

“It’s been fascinating for me watching the play-out of the media and then going out to speaking to clients and asking them questions,” she said.

“Of course they have actual work to do but there’s no reflection on what I’m seeing in the media.”

You can read the rest of the article here: http://www.businesscloud.co.uk/news/londons-tech-sector-plays-down-brexit-fears?utm_medium=email&utm_campaign=&utm_source=UKFastMailer1172&uuid=

The London Stock Exchange Group welcomed Diversity UK on Monday 11th June 2018 to mark its contribution to improving equality and inclusion in Britain and to mark the publication of the 2018 edition of the #Top100AsianStarsinUKTech #innovation #women #tech #entrepreneurship.

Our very own Sukhi Jutla, Co-founder and COO of MarketOrders was invited to the LSE to celebrate being listed on the Top 100 Asian Stars in UK Tech.

The date coincided with the launch of London Tech Week 2018 and the 171st birthday of women’s rights campaigner, Millicent Fawcett.

Diversity UK members and guests were welcomed by Nikhil Rathi, CEO of the London Stock Exchange Group and senior colleagues from the organisation’s diversity and inclusion team.

Lord Gadhia, who was a judge for Diversity UK’s Top 100 Asian Stars in UK Tech 2018 list, gave the keynote address emphasising the importance of diversity and inclusion for Britain.

The official list of the Top 100 Asian Stars in UK Tech 2018 was launched on June 4th in London by Diversity UK in association with the Ethnic Minority Foundation (EMF), KPMG and NewAsianPost.com.

We are super proud to announce that our very own co-founder and COO, Sukhi Jutla, made it into this list, flying the flag for MarketOrders!

Congrats to everyone who made it onto this list and thanks to Lopa Patel for shining a spotlight on Asian tech talent!